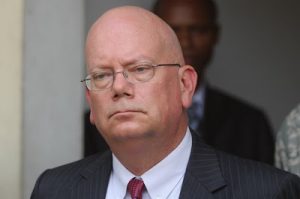 James Entwistle, United States (US) ambassador to Nigeria, and minister of foreign affairs, Geoffrey Onyeama were absent again from the hearing on the sexual misconduct allegation levelled against three members of the federal house of representatives.

Last week, the minister had pleaded for another date because of an Africa Union (AU) summit he attended in Kigali, Rwanda.

Ossai Ossai, chairman of the house joint committees on ethics and privileges and foreign affairs, read another letter from the minister explaining that he would not be available due to the federal executive council meeting scheduled for the day as well.

However, Entwistle, who had said earlier that he was in possession of video evidence of his allegation of sex scandal against the lawmakers, offered no explanation for his absence.

Last Thursday when the hearing was initially scheduled to commence, Entwistle was absent as well, also failing to offer any explanation.

He pleaded for another date.

Members of the committee expressed displeasure at the absence of Onyeama and Entwitle. -The Cable

Reason why I chained my son for weeks – Father