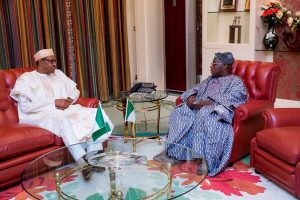 The two leaders met behind closed-doors after which Mr. Obasanjo told journalists he visited the president to deliver messages he brought from abroad.

Mr. Obasanjo, who spoke with State House correspondents, said, “I am visiting this time because I have some messages for the president.”

The former president said he recently travelled to Liberia and Gambia.

“I have messages that these two countries will want me to deliver to the president,” he said.

“Also, only yesterday I came back from Seychelles Island where I attended this year’s Annual General meeting of Africa Export Development Bank. And there are aspects of the proceedings that I think I should update the President on,” he said.

Mr. Obasanjo also said the issue of budget padding had gone beyond investigation.

He said what the nation needs to do now is to “get men and women of integrity in the place.”

He advised President Buhari to be vigilant and ensure that “whatever should not pass should not pass.”
When asked whether he enjoyed his frequent trips abroad. Mr. Obasanjo said, “travelling is a good education, what you will learn about a country by visiting that country for two or three days you won’t learn by reading through books.”

When asked whether he intends to ‘slow down’ any time soon, Mr. Obasanjo retorted, “May God not allow you to slow down.” -Nigerianeye