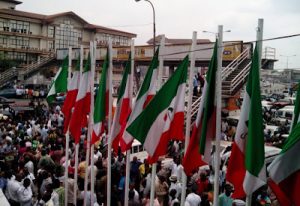 The police have sealed off the Sharks Stadium, venue of the Peoples Democratic Party convention, in Port Harcourt, Rivers State.

“Yes, we have (sealed off) the place,” Mr. Omoni said. “We are just obeying the court instruction.”

When reminded that there were two conflicting court judgments on the party convention, Mr. Omoni responded, “I don’t know what you are talking about”.

The News Agency of Nigeria reports that security operatives have denied delegates, journalists entry into the stadium.

A Court in Abuja had ordered the suspension of the convention, barring police and electoral officials from the event.

Another Federal High Court in Port Harcourt had earlier ordered the PDP to go ahead with the convention. -Premium Times

ISIS warn London ‘next to be attacked’