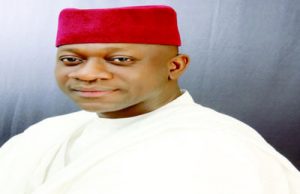 The All Progressives Congress on Monday fired a letter to Abdulmumuni Jibrin, summoning him to appear before a disciplinary committee at the party’s national secretariat in Abuja not later than Tuesday afternoon.

In the letter, dated August 1, 2016, and signed by the party’s Deputy National Chairman for the Northern Zone, Lawal Shuaibu, the APC expressed cautioned Mr. Jibrin’s over his media campaign against the Speaker of the House, Yakubu Dogara, and other principal officers over allegation of budget fraud.

“To say the least, it is absolutely unacceptable to resort to media war as a means of settling scores without recourse to and/or exhausting the party’s internal dispute resolution mechanism,” the party said.

Mr. Jibrin was removed as chairman of the Appropriation Committee in controversial circumstances on July 20 on allegations of betrayal of trust.

The lawmaker fought back, embarking on a vicious media campaign to have Mr. Dogara; his deputy, Yusuf Lasun; House Whip, Alhassan Doguwa and Minority Leader, Leo Ogor, removed from office. (Mr. Ogor is the only PDP member of the four.)

Mr. Jibrin’s campaign has seen him release details of how the passage of the 2016 budget was handled by lawmakers in a way that portrayed them as fraudulent.

On July 29, he disclosed that he had dispatched incriminating documents to the anti-graft agencies, who immediately swung into action.

By July 30, the State Security Service sealed the Appropriation Committee Secretariat in the White House Building of the National Assembly.

On Monday afternoon, Mr. Jibrin posted on his Twitter page that he had visited the EFCC, the ICPC, the SSS and police headquarters to personally submit petitions against Mr. Dogara and his colleagues.

In the APC’s letter to Mr. Jibrin, the party said the Kano lawmaker’s action underscored a blatant disregard for party supremacy and its existing dispute resolution mechanism, adding that it would work to ensure that it instilled discipline on all members.

“As a disciplined party, the constitution of our party has made adequate provisions on ways of resolving any issue among our members,” Mr. Shuaibu said. “It behoves on the party to take all necessary steps in order to ensure that no member of the Family brings dishonour to the party.”

The APC, therefore, reiterated its notice for Mr. Jibrin to appear before the party tomorrow, “urging” him to “be guided accordingly” as he digested the content of the letter.

“You are, therefore, by this invitation, expected to appear before the undersigned at the APC National Secretariat on Tuesday, 2nd August, 2016, at 2 p.m. Kindly note that failure to and/or refusal to honour this invitation will amount to a decision you have made not to submit to the party.”

“It’s a welcome development,” Mr. Ogor told  Premium Times. “Now that he has pushed the matter to the EFCC, then Nigerians should exercise patience to see what the truth of the matter is.”

Another lawmaker, Adams Jagaba, on Monday said Mr. Jibrin should desist from further defaming him and other lawmakers with the budget padding mess.

Mr. Jagaba said the warning became necessary after he learnt that Mr. Jibrin had named him alongside others who he accused of attempting to fraudulently inflate the 2016 budget figures, saying he had been a long time proponent of selflessness in public service.

Mr. Jagaba said his distaste for corruption dated back to his days as the chairman of teh House Committee on Anti-Corruption, saying he was amongst those who championed the course for a total rejection of bribes allegedly given to lawmakers by former President Olusegun Obasanjo, a tenet he said he had continued to uphold ever since.

“Ordinarily, I would have ignored the said publication, but I am compelled to respond for posterity sake. Without sounding immodest, my anti-corruption crusade dates back to my first term between 1999 and 2003, when I exposed the plot of the Presidency which attempted to bribe Honourable Members for the purposes of effecting a leadership change in the House of Representatives.”

“As Chairman, House Committee on Anti-Corruption then, I exhibited the money meant for that plot on the floor of the House at plenary. Again, in 2012, during the scandal that was referred to as “FAROUKGATE”, my name was mentioned. However, after thorough investigation by the Police and other relevant agencies, I was exonerated and given a clean bill of health,” Mr. Jagaba said.

Mr. Jagaba said he had continued to maintain a 2013 Toyota RAV4 mid-size SUV, saying Mr. Jibrin is the one who allegedly had cause to be afraid of facing consequences of his action.

“It amazes me, therefore, for Hon. Abdulmumini to petition the EFCC to investigate me for living above my means without giving any proof. As a third term member of the House of Representatives, I live in a rented three-bedroom apartment that has no Boys Quarters. Amongst the cars I drive, the most expensive one is a 2013 Toyota RAV4 2.2 litre engine.

“I do not move around with a convoy of expensive cars. If as a third termer and at fifty-six (56) years of age this is a summary of my life-style as stated above, I have nothing to fear. Can this be said of Hon. Abdulmumini who is less than forty (40) years old and only a second termer? Certainly not,” Mr. Jagaba said

“Hon. Abdulmumini may claim that he has been into business for a long time. But the question remains, what type of business? Before his election in 2011, he was a lecturer. It is a known fact that he was arraigned by the EFCC in 2012 for some shady deals he got involved.

“It is characters like him who should tremble in fear at the mention of the name of EFCC. I hope I should not have cause to pick up my pen on this issue again, as Hon. Abdulmumini may not find it palatable. My counsel to him, therefore, is: “Those who live in glass houses should not throw stones”.