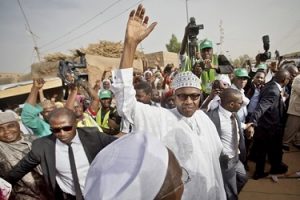 The bodyguards of President Muhammadu Buhari who participated during the campaigns, have lamented that they have been pushed to the corner and excluded by those they tagged as ‘cabals in the government.’

Speaking at a press briefing addressed by Olabiyi Balogun, and three others, Audu Odemeho, Abdullahi Hassan and Zubairu Idris, on Thursday, the bodyguards of President Muhammadu Buhari, who participated during the 2015 presidential campaigns, protested against their exclusion by those they described as “cabals in the government.”
According to a report by Punch, the group alleged that apart from the N20,000 they got on two occasions in January and February 2015, “we had never and were never given anything.”
While some of them wept profusely because “some cabals have hijacked the President,” they said many of the key actors in Buhari’s government, who did not work for him, “are now reaping where they did not sow,” and had denied them access to him, warning that their marginalisation constituted a security threat to the country.
Balogun said, “Right now, we need Mr. President to appreciate our hard work for him. We need Mr. President to recognise the fact that we have lost everything because we championed the change agenda.
“Definitely, it is not just our exclusion that is a security threat to the country. Anything that will deny any man his dues and legitimate rights can be concluded to mean a security threat because when you don’t get your dues and what is rightly due for you, then you are opened to a lot of temptations. So, we are indeed a security threat.”
It was gathered that the members of the Presidential Bodyguards, put at over 100 personnel, were said to have been drawn from the security and protocol departments and the Buhari Support Organisation.
“During the electioneering campaign, we served the current President, Muhammadu Buhari, as his personal bodyguards. That was who we were and that is what we are till now.
“One would have expected that having worked hard tirelessly and relentlessly for the President to assume the office he had desired all these years, the people that were in the forefront deserved to be recognised, compensated and remunerated, considering the volume of work and gravity of the sacrifices we had to make.”