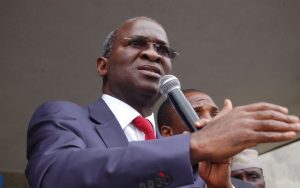 Babatunde Fashola, minister of works, power and housing, has advised those displeased about his supervision of three ministries to tender their complaints to President Muhammadu Buhari.

Responding to a question at a town hall meeting in Abuja on Tuesday, Fashola said he only plays a supervisory role in the ministries.

He added that Buhari decided to merge three ministries in order to reduce the cost of running government.

“Whether I can cope with three ministries or not, let us be clear on this. On the one hand, we have spoken about the cost of running government. And in trying to mitigate or reduce that cost, Mr. President, in his own wisdom, decided to merge three ministries together,” he said.

“So, it is no longer a government-driven sector, it is now a government-regulated sector driven by private sector. And if you have issues about that, I think you should complain to Mr. President. For me, the privilege is to serve my country in whatever capacity I am designated to.”

Fashola said over the years, the ministries that were merged together have had close working relationship.

He explained that his role as the overseer of the ministries is just directional, noting that the privatization of the power sector has made things easier. -The Cable