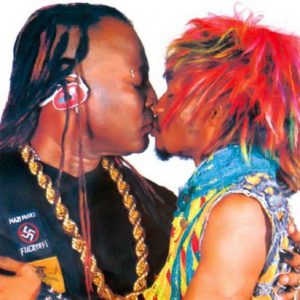 Denrele was a guest on an NTA programme, where he talked about the picture of Charly Boy kissing him.
Though he has since debunked the gay rumour, Denrele said, the picture emanated following a movie they were shooting about two different generations with similarities.

According to him, while, they were posing for shots like father and son, after the day’s activities, Charly Boy planted  a quick kiss on his lips. “We were shooting a film of two different generations with similarities.

Later that evening, we  were posing for shots like father and son. Jokingly, he planted a kiss on my lips and that was it. Before, we knew what was happening,  the picture was everywhere,” he added.

Recall that a photo of Charly Boy kissing Denrele went viral years ago, causing many fans to raise eyebrows at the suspicious act. Since then, fans have not stopped accusing Denrele as being gay.

Charly Boy once explained that the picture was leaked with Denrele’s consent. The major motive was to publicize the video before gay allegations trailed both parties. -Vanguard

Adesina: Why I stand with Buhari