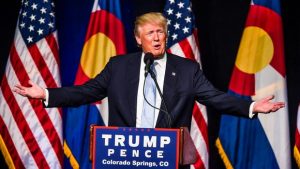 Donald Trump and several members of his Secret Service team were briefly trapped in an elevator before a presidential campaign rally in Colorado on Friday, July 29 — and, once safe, he was quick to place blame for the incident.

According to CNN, the Republican presidential nominee, 70, and his entourage were rescued by members of the Colorado Springs Fire Department, who lowered a ladder into the elevator to allow Trump to climb out.

Once the businessman took the stage at his rally at University of Colorado Colorado Springs, he slammed the fire marshal who rescued him during his opening remarks. “This is why our country doesn’t work,” Trump told his supporters of the incident.

According to the Denver Post, Trump accused the fire marshal of not knowing “what he was doing” and said his rescuer “was probably a Democrat.” He also stated he was “not a fan of” the marshal.