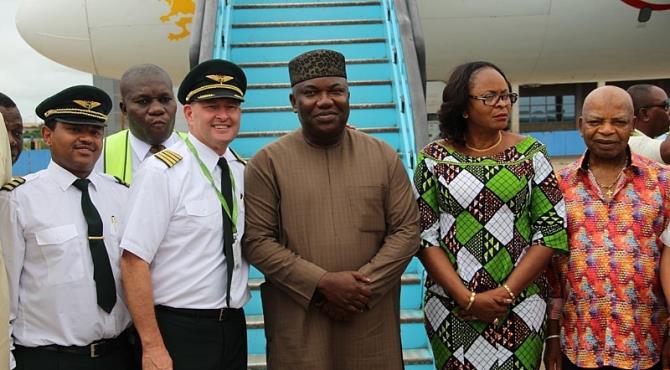 Governor Ifeanyi Ugwuanyi of Enugu State, on Tuesday, August 23, 2016, led other eminent dignitaries of the state to the ceremony marking the landing of the first international cargo aircraft at Akanu Ibiam International Airport, Enugu, courtesy of the Ethiopian Airlines.

Ugwuanyi explained that the momentous event was consistent with the objectives of the first ever Enugu State Investment Summit held in April where he had declared that Enugu State was “ready for business.” According to him, it was noteworthy that the cargo plane landed exactly three years on August 24, 2013 when a jubilant crowd welcomed the first ever international flight to Enugu operated by the Ethiopian Airlines.

The first cargo plane yesterday landed at the Akanu Ibiam International Airport in Enugu. The landing of the Ethiopian Airline Boeing 757 cargo plane was witnessed by an enthusiastic crowd and other dignitaries including Governor Ifeanyi Ugwuanyi. Addressing the large crowd of people on the occasion, Governor Ugwanyi described the incident as a historic occasion that would increase the profile of the airport and boost the economy of the state and the entire South East zone.

“Today we have gathered again to celebrate the first landing of cargo at this same airport, and which once more has happened courtesy of the Ethiopian Airlines,” he added, pointing out that the development meant that people from the region could fly to all parts of the world and have their bulk cargo delivered to them through the same airport since, “It will save costs, enhance convenience and safety in importation of goods,” apart from promoting employment and raising the international profile of the airport and the entire region.” 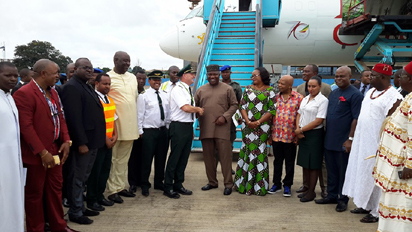 Ugwuanyi then commended both the Federal Government and the Ethiopian Airline operators for making the age-long dream of the entire South-East region come to fruition, asking investors and the business community to take full advantage of the new opportunity to expand their businesses and develop the region and the country at large. He also reassured “the company of the unremitting goodwill of our people and of our continued support, partnership and cooperation.”

Thanking his hosts for the warm reception, the captain of the airline, Captain Williams praised the Akanu Ibiam International Airport’s lovely environment, adding that it was a nice experience because their landing was smooth.

Also speaking on the occasion, the Traffic and Sales Manager of the airline, Mr. Biniam Addisu said: “We expect to get from the Federal Government the kind of support we have been getting from the Enugu State government. “We are comfortable with the aviation equipment installed here, and hopefully in a few months’ time the international terminal will become fully operational for things to get better.”
Broadcast:

Fuel scarcity: Oil marketers stop importation due to $1b debt