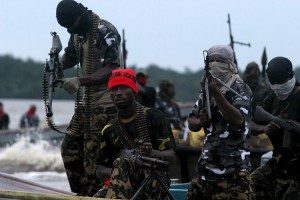 Niger Delta Avengers (NDA) has given tips to Nigerian military on how to win the battle against militancy in the region.

The group members dared military to come after them in the creeks rather than remaining in the comfort zone of the cities.

The group maintained that its aim is to cripple the nation’s economy and not to kill military officers, noting that avoiding the military was not a sign of weakness.

A statement by NDA’s spokesman, Muddoch Agbinibo, said no member of the group had been arrested by the Navy, noting that those arrested were agents of the military who failed in their assignment to get information about NDA.

Agbinibo maintained that the household of the militant group remained intact, adding that it was unfortunate that the military was busy killing innocent souls in the region in the name of looking for Avengers and illegal bunkers.

“If the Nigeria military is serious about arresting NDA let them come to the creeks of the Niger Delta, that is where we dwell not the city.

“ If I (Brigadier General Moduch Agbinibo) were the Commanding Officer NNS Delta (Commodore Joseph Dzunve) and commander of the so-called Operation Delta Safe (Rear Admiral Joseph Okojie), I would have been in the creeks instead of sitting in the comfort of my air-conditioned office,” the statement read.

According to the statement, two suspects, including Stanley Tonghan and Felix Miyenminiye, which the Navy claimed to have arrested and subsequently paraded as members of avengers, were ‘sleepers’ agents to track or checkmate the activities and operation of the NDA.”

Agbinibo advised elders in the region to be wary of the antics of the Federal Government, adding that the government was not sincere about any negotiation to end hostilities and bring about the needed development of the region.

“Can you tell the world the government official you been dialoguing with? Is it the president? Or is any of the committees set up for it? We respect you our elders, as such stop behaving as if the Niger Delta is a seized region and stop acting like you are begging the government for dialogue.

“The worse the government will do is to bombard our villages and towns in the name of looking for NDA. So, our elders should tread carefully with the Nigeria government. The reason behind military harassment of towns and villages in the Niger Delta is because NDA has not confronted the Nigeria military in battle.

We are not scared in confronting you. The creeks of the Niger Delta belong to us, so defeating the Nigeria military is not hard for us. We have made it clear on many occasions that our business is to cripple the Nigeria economy not to kill military. The Nigeria military should not think we (NDA) avoiding them is a sign of weakness.” -The Sun