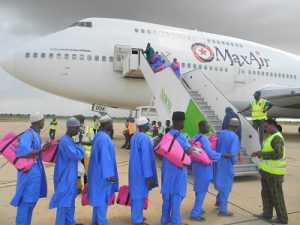 The National Hajj Commission of Nigeria (NAHCON) on Sunday said the Federal Government has not given foreign exchange waiver to Nigerian pilgrims performing hajj this year.

The commission’s Head of Media, Uba Mana, said this in a statement in Abuja on Sunday.

“The National Hajj Commission of Nigeria wishes to draw the attention of the public that the Federal Government has not given foreign exchange waiver to Nigerian pilgrims performing this year’s hajj,” Mr. Mana said.

“If there is one thing that the Government did for the Nigerian pilgrims, it was to allow the exchange rate prevalent at the time of payment of Hajj fare in February when the current flexible exchange rate was not in action to subsist.

“It is therefore wrong and mischievous for some persons or media organisations to peddle unfounded claims that the Federal Government gave the Nigerian pilgrims a waiver,’’ he said in the statement.

The News Agency of Nigeria (NAN) recalls that the Presidency had earlier clarified the concessions of foreign exchange rate of N191 to one dollar for the 2016 intending pilgrims to Hajj and Jerusalem.

The Senior Special Assistant to the President, Media and Publicity, Garba Shehu, said the policy was non-discriminatory.

He said that it had been approved before the current foreign exchange regime came into effect.

He also said that that the Central Bank of Nigeria had confirmed the approval, wondering why the apex bank had not notified the public earlier.

President Muhammadu Buhari has been roundly condemned for approving foreign exchange concession to pilgrims at a time the economy is struggling.

On Saturday, the Afenifere Renewal Group, a Yoruba socio-political group, warned the government against its policy of subsidising pilgrimage.

In a statement by its Publicity Secretary, Kunle Famoriyo, the group said the policy sent wrong signals about the touted autonomy of the Central Bank of Nigeria.

“It is tantamount to prioritizing religion over the nation’s economic needs,” the statement said.

ARG said religion was personal and should not be given priority when there were more fundamental and higher priority issues to expend the country’s scarce foreign exchange on.

Outrage had greeted the CBN’s decision that dollar be sold to intending pilgrims at N197/$1 at a time the market rate is averaging N400/$1.

Public condemnation had trailed a similar directive by the apex bank last year mandating banks to release dollar to the pilgrims at N160/$1 when the exchange rate for around N197/$1.

“This religious subsidy policy is needless, leaves room for sharp practices, and it is in bad taste considering that the forex policy is deemed to have been somewhat been liberalised,” the group said.

“For example, importers of pharmaceutical products and textbooks do not benefit from a government special rebate, considering that these are more essential needs.

“Education has also been adversely affected by the forex crisis with more Nigerians affected than those going on pilgrimages,” the statement said.

“Already, thousands of Nigerians studying abroad are being recalled home because their sponsors could no longer afford the fees.

“Also, We know that overseas education is a private choice but so also is religious pilgrimage. If any of the two deserves government intervention, it is education, unequivocally.”

The ARG maintained that the policy did not portend well for the economy at a time Nigeria was desperate about shoring up its Foreign Reserve.

“This policy is more damaging to a larger Nigerian population that depends on stable forex policy and strengthening of the Naira. This is clearly a wrong priority and it must stop.” -Premium Times

Presidency: List of stolen and recovered loots will be released this...