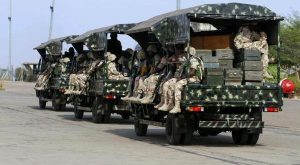 The Nigerian Army said on Friday that three soldiers and seven civilians died in a clash between soldiers and some residents of Kpaidna community in Niger.

Njideka Agwu, a major and Assistant Director, Army Public Relations, 31 Artillery Brigade, Minna, made this known in an interview with the News Agency of Nigeria (NAN) in Minna.

Ms. Agwu said the incident occurred at 2.00 a.m. on Friday in the community located in Bosso Local Government Area of the state.

“The 31 Artillery Brigade of the Nigeria Army, Minna, was on a joint operation with the Nigeria Air Force Quick Response Group in the area when we were attacked by the villagers.

“We were on a cordon and search operation in the village because we got intelligence report that there were caches of arms and ammunitions in the area.

“During the operation, three soldiers and seven civilians lost their lives, while 57 villagers were arrested by the joint operation,’’ she said.

Ms. Agwu said arms and ammunition were recovered during the operation which was still ongoing.

“Trouble started when some of the villagers denied the military access to their houses to enable soldiers search for arms and ammunition believed to be stockpiled there.

“During the clash, six operation vehicles belonging to the army were destroyed by the villagers; four were set ablaze while two were vandalised,’’ she said.

Ms. Agwu enjoined law abiding citizens in the area to go about their normal businesses as the operation was to safeguard lives and property.

She urged members of the public with useful information that would lead to the recovery of arms and ammunition in the area to report to the nearest security agency.

Bala Elkanah, the Police Public Relations Officer in the state, confirmed the incident which he described as “purely military matter’’.

“It was purely a military operation. We (police) were not involved,” he told NAN.