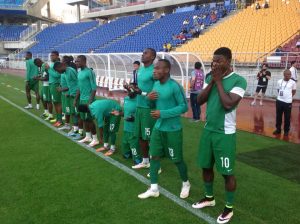 Team Nigeria Captain, John Obi Mikel, scored a goal and also provided an assist on Saturday as the Dream Team VI cruised into the semi-finals of the men’s football event of the Rio Olympics with a 2-0 win over Denmark.

The Dream Team, who had before now been enmeshed in wrangling over unpaid allowances, came out smoking against the Danes.

Chelsea star, Obi Mikel, put Nigeria in front in the 15th minute after he connected to a cutback pass by Imoh Ezekiel.

Ezekiel, who provided the first goal, had the chance of his own moments after but the hardworking forward failed to bury the ball in the net as his effort went over the bar.

The Danes did give a brave fight but goalkeeper Emmanuel Daniel was up to the task, posting some impressive saves.

The Nigeria U-23 team continued from where they stopped at the restart of the second half as they continued to push for another goal.

Their efforts finally paid off just before the hour mark when Mikel, with a well-delivered cross, found Aminu Usman who connected with a header which put Nigeria 2-0 up.

The Danes made a flurry of changes to attempt to turn the tables but they were unable to breach the Nigerian defence even though many feel that department is the weakest link in Coach Samson Siasia’s team.

With the win, Nigeria will be up against Germany in the semi-final.

The Nigeria U-23 team are hoping to win the gold medal like the Atlanta 1996 set did.

Zuma beneath stress to give up