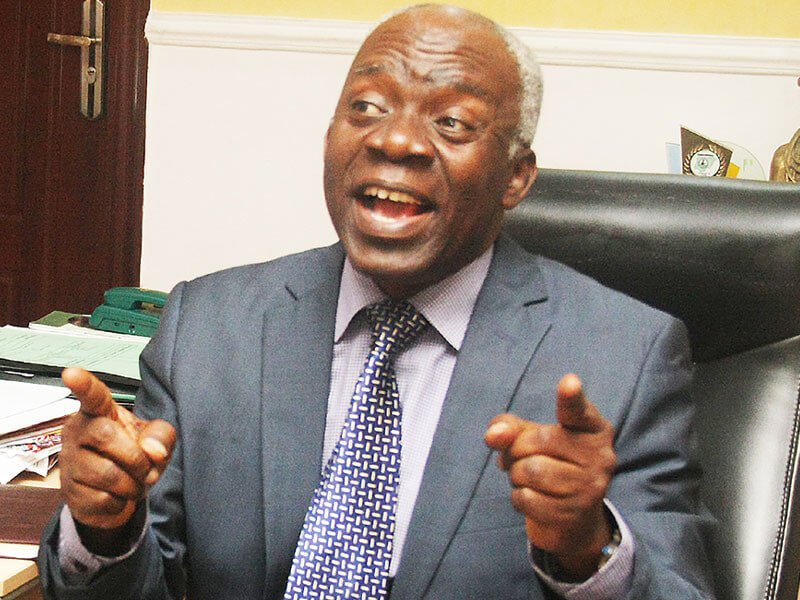 The NIA had claimed ownership of the $43 million, N22 million and £27,000 discovered in a residential apartment in Ikoyi, Lagos. Femi Falana (SAN), A popular human rights lawyer, in a recent interview on Channels TV Sunrisedaily Programme stated that the federal government would be rubbishing its whistle-blowing policy if it accepts the National Intelligence Agency’s claim over the monies recently recovered by the Economic and Financial Crimes Commission (EFCC).

Similarly, the Rivers State governor, Nyesom Wike had also claimed that the money was kept by Transport Minister, Chibuike Rotimi Amaechi, and that it belonged to the state.

Reacting to the controversy trailing the discovery of the money in a statement, the Senior Advocate of Nigeria (SAN) wondered why the funds, if it truly belongs to the NIA, was not kept in “a safe in the well-fortified” office of the national security adviser.

He recalled that, “In 2014, two businessmen (an Israeli and a Nigerian) smuggled $9.3 million to South Africa from Nigeria. It was alleged that the private jet with which the fund was hauled was leased from the then President of Christian Association of Nigeria, Pastor Ayo Oritsejafor.

“Both suspects were arrested while the fund was seized. The additional sum of $5.7 million sent to South Africa through a bank by the duo was also seized. Although the Federal Government was not implicated in the transfer of the fund, the Office of the National Security Adviser (ONSA) later claimed that the $15 million was meant for the purchase of arms from a firm in South Africa.

“As the ONSA could not justify the brazen contravention of the Money Laundering Act of South Africa, the fund was confiscated on the orders of a High Court in Pretoria. When tried last year to confirm from the Attorney-General of the Federation if the forfeited sum of $15 million had been recovered from the President Jacob Zuma regime, I was asked to direct my enquiry to the ONSA.

“It is hoped that history is not repeating itself with respect to the embarrassing attempt by the National Intelligence Agency (NIA) to claim the sum of $43 million, N22 million and £27,000 seized by the EFCC last week from a flat at a building in Osborne Road, Ikoyi.”

He called on the federal government to handle the matter in such a way that Nigerians would be carried along.

He added, “The Federal Government owes the nation a duty to handle this matter with utmost transparency and circumspection. The NIA should not be allowed to play on the collective intelligence of the Nigerian people. If the Federal Government believes the cock and bull story of the NIA, the danger is that similar hidden funds are going to be officially protected, thereby making a mockery of the whistle-blowing policy of the government.

“We must avoid a situation whereby huge funds hidden in abandoned buildings and apartments are said to be “operational funds” kept by certain security agencies. If the EFCC had refused to seize the fund last week, the whistle-blower could have rushed to the media to accuse the Buhari administration of keeping stolen money for the 2019 general elections.”

Falana also advised the Rivers state government, whose governor Nyesom Wike claimed ownership of the funds, to file an affidavit to the effect at the federal high court.

“Apart from the NIA, the Rivers State government is also laying claim to the fund. But instead of giving the Federal Government a seven-day ultimatum to hand over the money to the Rives State government, Governor Nyesom Wike should instruct his attorney-general to file an affidavit at the Federal High Court.

“But before doing that, he should carefully study the case of FRN v CBN (unreported) where the application of the Delta State government to claim the bribe of $15 million paid to the then EFCC chairman, Mr. Nuhu Ribadu, by a former governor of the state was dismissed as the applicant was unable to prove that it owned the money.

“On a more serious note, are Nigerians to believe that an agency of the federal government kept about $50 million in an apartment without adequate security personnel to guard the money? Why was the fund not kept in a safe in the well-fortified ONSA? When was the National Intelligence Agency exempted from the Treasury Single Account (TSA)?

“If the DG of NIA has just gone to brief President Buhari that the fund was collected from former President Goodluck Jonathan for a special project, why did the briefing not take place before now? Since the NIA is in charge of external security why was it necessary to execute projects in the country? How much of such fund is being kept in private homes by the NIA and other security agencies?

“Since the whistle-blowing policy of the Federal Government commenced why has the NIA not deemed it fit to take the anti-graft agencies into confidence with respect to the fund being kept in Ikoyi for the so called covert operations?

“Is the Federal Government not being exposed to ridicule when corrupt public officers are competing with government departments to hide millions of United States dollars in dump sites and ‘safe’ apartments? Anyway, since the Federal High Court has granted the application filed by the EFCC for an interim forfeiture of the fund, it is no longer an internal affair of the Buhari administration. Let the National Intelligence Agency approach the court with convert proof to claim the money.”. – Karifest BLOG